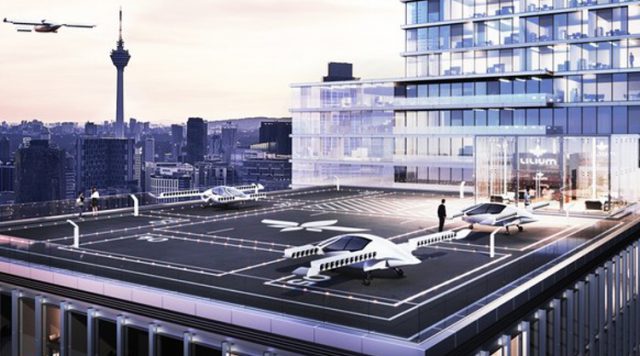 N THE PAST year, flying cars have gone from LOL, to maybe a real thing, to a booming industry raking in VC cash and churning out sweet renderings of an aerial future.

The chance to trigger the next great transportation revolution has drawn in big companies, like Airbus and Uber, big names, like Google’s Larry Page, and naturally, a horde of startups. They all believe the proliferation of vertical takeoff and landing (or VTOL) aircraft, which combine the best features of helicopters and planes, can make traveling throughout and between cities not just faster, but maybe cheaper and greener.

AI expert Sebastian Thrun thinks the idea will only climb higher, especially once these aircraft can fly themselves, and he wants to help make it happen.

“I see a future where everybody flies at least once a day,” he says. Getting there, however, will require a ton of work: building the aircraft, making them reliable, teaching them to land safely and avoid each other in congested airspace—and doing it all without human pilots in charge. That means finding people who can develop complicated software that accounts for the vagaries of aeronautics.

“Merging those two is a gap you don’t see many people bridge,” says Richard Pat Anderson, who runs the Flight Research Center at Embry-Riddle Aeronautical University and is developing his own VTOL aircraft.

So Thrun, best known for launching Google’s self-driving car program (now known as Waymo), plans to make that gap a lot smaller. Next year, his online education company, Udacity, will inaugurate the Flying Car Nanodegree Program. The course—whose cost and duration remain TBD—promises to prepare anybody who meets some key requirements for a job in this most Jetsons-y of industries.

Udacity hasn’t finalized the prerequisites for this course, but Thrun guesses they’ll look similar to those for the self-driving engineer course he started last year: strong programming skills and a good deal of math know-how. Anderson recommends students be skilled in things like differential calculus before signing up. “They require a pretty extensive skill set just to sit in the seat,” he says.

That’s because this is hard stuff. Udacity’s flying car cadets will have to master things like designing aircraft and controlling them in three dimensions while the wind is gusting in different directions. They must develop vehicles that can perfectly perceive the world around them, avoid fellow travelers, and identify safe landing spots, even (especially) when sensors fail and things go haywire.

Students should expect to spend 10-20 hours a week on the course. They’ll be doing projects instead of sitting through lectures, working in flight simulators on all of the above tasks. To build the curriculum and run the classes, Udacity has brought in a few experts: Nicholas Roy, from MIT’s Department of Aeronautics and Astronautics; Angela Schoellig from the University of Toronto’s Institute for Aerospace Studies; and Raff D’Andrea, co-founder of Kiva Systems, which Amazon bought in 2012 to operate its fulfillment centers.

Anderson may doubt the efficacy of online education—he says his students perform better when he works with them in person—but he agrees there’s serious demand for this kind of expertise from the bevy of people trying to deliver flying as personal transport. And one of the key advantages of Udacity’s approach is that its courses are open to anyone who meets the prerequisites and has the money to pay for it (the self-driving engineer program, for example, costs $2,400 for a 27-week course). You don’t have to go back to school full-time or somehow warp back into your 19-year-old self to get started on a new career.

So for anyone psyched about this future of flight, the good news is that all the companies trying to make it happen might soon have access to a bigger workforce. And for anyone who understands differential calculus: Go make us some flying cars already.

Can’t Decide What Kind of Flying Car to Get? Try These...