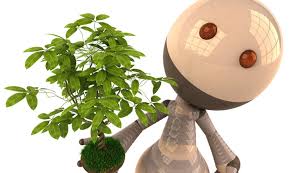 JUST AFTER DAWN in the Salinas Valley south of San Francisco, a raucous robot rolls through a field spitting clouds of vapor. It’s cutting lettuce heads with water knives—super-high-pressure beams—and gobbling up the produce. The heads roll up its mouth and onto a conveyor belt, where workers in hoodies and aprons grab the lettuce and tear off the loose leaves.

Right across the road, workers are harvesting lettuce the agonizing old-fashioned way—bent over with knife in hand. “If you’re a beginner, it kills you because your back really hurts,” says Isabel Garcia, a harvester who works atop the robot. “It takes somebody really strong to be doing that kind of work.”

Garcia and the other workers here didn’t lose their jobs to a robot—they work in tandem with one. And just as well, because California farms are facing a serious labor shortage of perhaps 20 percent. Increasingly sophisticated robots have to pick up the slack, here and around the world. Because if humanity expects to feed its booming population off a static amount of land, it’s going to need help.

Here in the Salinas Valley, farmers and tech types are teaming up to turn this into a kind of Silicon Valley for agriculture. And they’re not stopping at water-knife-wielding robots. Because it’s data that will truly drive this agricultural revolution. It’s not just about robots doing jobs humans don’t want to do, but AI doing jobs humans can’t do. And AI can’t go anywhere without data.

For sure, the robots will definitely support the dwindling farming workforce. Fewer immigrant workers are coming to the fields, and their demographics are shifting. “Just with a changing population here in California, we’ve got an aging workforce,” says Mark Borman, president of Taylor Farms California, which operates the robot. “So people who are coming out to do agricultural, we’re not getting that younger population into the job.”

That means not only using robots to help fill those jobs, but modifying the product they grow to make things easier for the machine. Taylor Farms has selected a kind of romaine that grows more like a light bulb, which leaves a longer base for the water knife to more efficiently slice. So while workers are adapting to work with the robot, the farm is adapting the produce to work with the machine. This is what the future of agriculture looks like: Humans modifying food to fit robots as much as they modify their own behavior to suit the machines.

More and more, agriculture is about automation. Not that automation is anything novel. Farming has seen thousands of years of technological advances, from the horse-drawn plow to the combine harvester. But in this digitized world, the pace of automation is accelerating. “At the end of the day, a lot of the traditional work that’s being done in the fields, fewer and fewer people want to do that,” says Dennis Donohue, lead of the Western Growers Center for Innovation and Technology, a kind of incubator that tallies over 30 ag tech startups in downtown Salinas. “So parts of those functions are simply going to be automated.”

“We’re not looking to replace a workforce,” Donohue says. “We’re looking to maintain an industry and the food supply for North America.” In fairness, automation is also great for making money, whether it’s at the expense of workers or not. But Donahue has an existential argument on his side that, say, car factory operators don’t: Humanity is in danger of not being able to feed itself. By 2050, the world population could boom to almost 10 billion people. Farmers will have to feed those humans—not to mention their livestock—with the same amount of land. Hell, even less land, as ocean levels continue to rise.

Automation will chip away at the problem of production efficiency. But data technology solutions may be even more critical. Here in the incubator, a startup called AgriData is developing a way for machines to manage the productivity of fields. Its gadget rapidly scans trees to pinpoint fruits and determine their yield. Thus farmers can get a better sense of how their fields are producing to better time their harvests.

Up in the hills overlooking the Salinas Valley, one winery is using data to tackle an even more pressing problem: water. Hahn Family Wines has partnered with Verizon to digitize its fields, sampling the soil as well as the humidity around the plants. “With our soil sensors we’re measuring how far down that moisture is going and if it’s gone out the bottom of the soil,” says Andy Mitchell, director of viticulture. “Then we know we’ve put on too much water so we can cut back. It really helps us fine-tune our application methods.”

California may be out of its brutal drought, but there’s no telling how climate change will shape the coming decades. The state has to somehow provide water for 20 million people while watering a $50 billion agriculture industry. And that’s to say nothing of, well, literally everywhere else on the planet. But expect the technology growing here in the Salinas Valley to make its way around the world, water knives and all.