Home New Tech Automobile Can’t Decide What Kind of Flying Car to Get? Try These 10!

COMMUTERS OF THE world, rejoice. The long-promised age of the flying car is finally here—more or less. Big-name companies around the world are showing honest to goodness flying machines in action, and promising to make them available to the public soon. This sudden shift can be pinned on recent tech advances: Better motors, batteries, and lightweight materials mean designers’ dreams can now be built. The flexibility that comes with compact electric motors gives engineers almost total free reign, and man have they taken advantage.

Two propellers, or a few dozen? Wheels for ground transportation, or pontoons for water landings? A design that resembles a football glued to a harmonica, or something with more of a motorcycle-loving comic book villain vibe? Nothing, it seems is off limits in this new space. (And sure, “flying car” might not be the perfect term for all of these aircraft, but they all serve the same basic purpose: Moving you from A to B, no roads necessary.)

There are definitely some details to work out—like how to regulate these things and safely introduce them into the skies over cities—and that could take years. But hey, it’s all the more time to figure out which flying car is just right for you. Here’s a look at the vehicles ready to make up the next generation of transportation.

The Aeromobil Flying Car is on display at the Paris Air Show, hoping to grab the attention of the world’s aviators. The Slovakian company plans to produce 500 of these vehicles, and sell them at $1.2 million each. This one’s a transformer. Transition from driving to flight modes takes just three minutes, as wings unfurl like a waking dragonfly, and a rear propeller pops out at the back. This is the vehicle for you if you have access to at least a stretch of road to use as a runway, but want to soar above traffic jams. 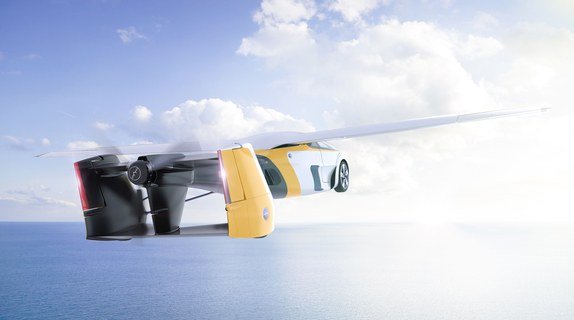 Neva Aerospace, a UK-based consortium made up of five aviation-focused companies, wants to build the AirQuadOne. Electric turbofans for propulsion at each of its four corners make it essentially a bigger version of a hand-held quadcopter drone. Neva’s range estimate of 25 miles may not sound like much, but it is refreshingly realistic—and plenty to get across most cities. 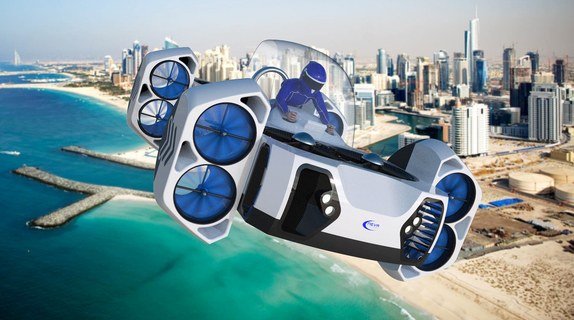 If you can’t tell from the look of the thing, Kitty Hawk designed its Flyer for the recreational end of this market. Its machine, backed by Google’s founder Larry Page, looks like something the Green Goblin would have ordered from Skymall, and for the moment can only be operated over water. Good news for wealthy lake house owners: The designers say it takes just minutes to learn to fly this thing, and there’s no pilot’s license required. Oh and there’s a net to stop you from tumbling onto the spinning props. It’ll be available at the end of the year. 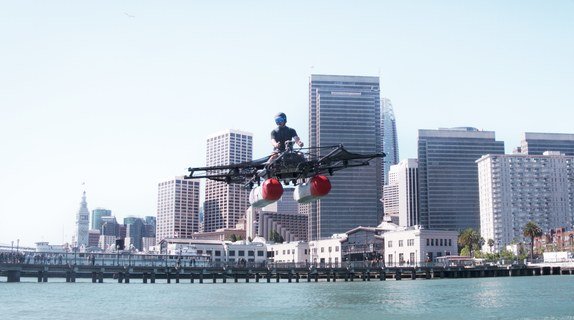 Aurora’s designers really went to town on the fan front, squeezing 24 spinners onto their flying machine. The Lightning Strike’s distributed electric propulsion system demonstrates a key advantage of small motors: Engineers were able to tuck them inside the wings, and make them swivel for vertical takeoff and landings—no runway required—but then face backwards for rapid horizontal flight. The first version of this aircraft has already completed tests for Darpa and the US Air Force, which are evaluating its usefulness. 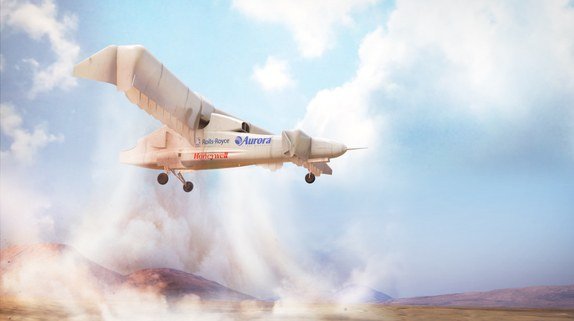 The Helicopter of the Future

The Volocoptor is a new take on the helicopter. Instead of two huge blades on top, it has 18 smaller ones, spaced out on a ring that approximates the reach of traditional rotors. German company e-Volo says this funky thing will have two seats and be super easy to fly. Twin batteries offer 30 minutes flying time, and it can be yours for a relatively reasonable $340,000. 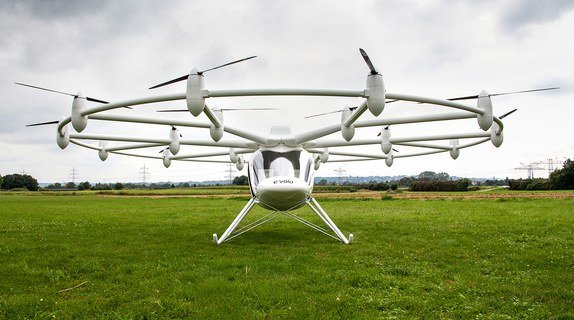 Fly to Work in a Football

Lilium Aviation’s Jet uses the same distributed electric propulsion concept as Aurora’s Lightning Strike. It’s a battery powered, oversized football, with a glass dome over the occupants and an array of swiveling fans on the wings at the back. A full-sized prototype took to the air in Munich, Germany in April, proving that the basic idea works. Lilium’s claims of 190 miles of range at 190 mph may take some yet-to-be invented battery tech though.

Airbus builds the world’s largest passenger plane, the A380, along with around half of the other commercial jets that airlines operate. That’s to say, it knows how to build flying machines. The modular Pop.Up flying car stretches things though. The concept centers around a carbon fiber passenger pod, which can either clip onto wheels or under a giant quadcopter to reach its destination. You’ll be shocked to hear there’s no timeframe for this one. 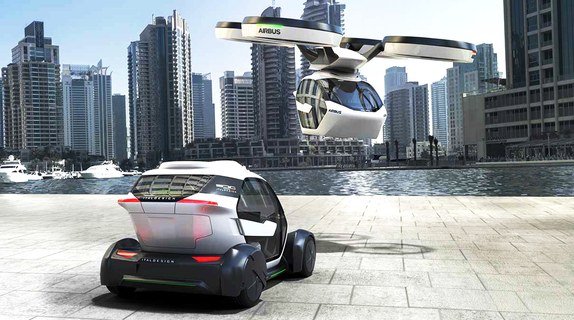 Airbus isn’t content with designing just one flying car. It’s also building Vahana, an autonomous flying machine. This one has eight rotors and tiltable wings, and it looks pretty cool with a lift-up cockpit revealing seating for one. The company is already working on a full-size prototype, and it planning a demonstration flight by the end of the year. 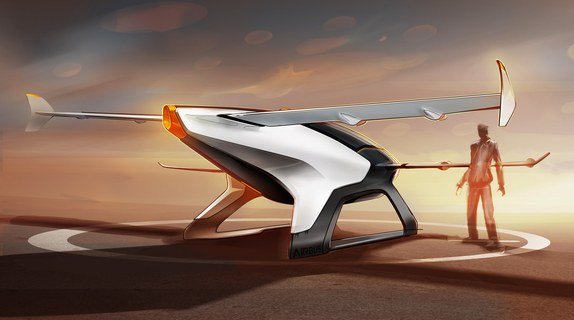 For motorcyclists, Flike’s machine could offer the best flying substitute. The Hungarian company is building a saddle surrounded by a triad of shrouded double-rotors. The engineers behind it say they were motivated by reading an article saying a drone would never be powerful enough to lift a human, and setting out to prove it wrong. They’ve managed a short flight in a prototype, and promise more to come. 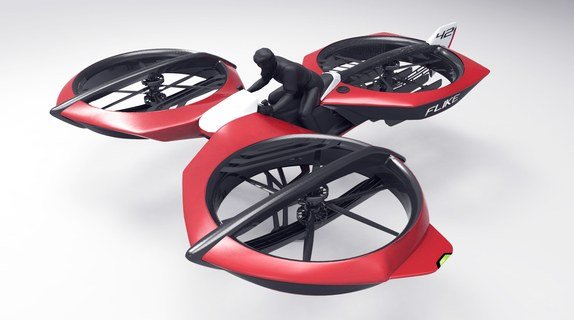 Step Up to a Jet

Isreali company Eviation Aircraft picked this week’s Paris air Show to reveal its new all-electric aircraft. This one isn’t exactly a flying car, but it uses some of the same technology to make a more accessible private jet that runs on electricity. The sleek white concept looks like a Global Hawk military drone, with twin tails and long wings, but porthole windows for its human cargo. It’s designed to be ultra efficient, so this will be the machine to aim for when you need a little more range than just jumping over the traffic between home and work. 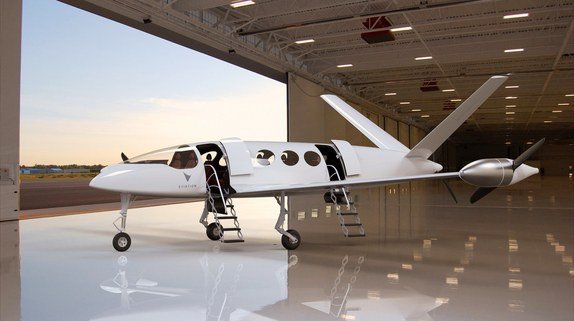