Instead, by the time the company moved to the Moreno Valley, it had closed five facilities in Ontario that employed 1,200 people and cut its workforce by more than half. Today, spotting a human on the premises can feel like an accomplishment.

There are now only about 550 people working at one cavernous warehouse, which is about as big as two Staples Centers combined. Many of them sit behind computer screens, monitoring the activities of the facility’s true workhorses: robotic machines. 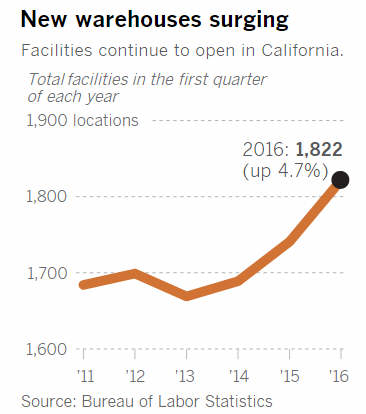 In the last five years, online shopping has produced tens of thousands of new warehouse jobs in California, many of them in Riverside and San Bernardino counties. The bulk of them paid blue collar people decent wages to do menial tasks – putting things in boxes and sending them out to the world.

But automated machines and software have been taking up more and more space in the region’s warehouses, and taking over jobs that were once done by humans. Today, fewer jobs are being added, though some of them pay more.

Amazon, one of the biggest dogs in warehousing, has built 20 new fulfillment centers outfitted with robotics in the last three years, four in California. Since 2014, the company has added 50,000 warehouse workers nationwide — and more than 30,000 robots.

Robots are muscling their way into almost every single occupation, but they pose a direct and immediate threat to people working in storage, industry experts say. That work is repetitive and fits into a chain of supply and delivery that generates reams of data.

That shift mirrors the path taken by American manufacturing, where there are fewer jobs going to more qualified people. It underscores how tricky it will be for President-elect Donald Trump to follow through on his promise restore American assembly jobs en masse.

Automation makes companies more productive and richer, which is why machines now do the bulk of carmaking, Uber is developing self-driving cars and farmers now use robots to plant, harvest and pack crops.

That math does not bode well for most humans, especially those who work with their hands.

Warehouses have been a bright spot for lower-skilled Californians. But hiring leveled off in 2016, even though new warehouses kept coming online.

Meanwhile, 81 new warehouse and storage locations have cropped up in California over the last year, an increase of 4.7%.

Manual laborers were in short supply on a recent Monday at the giant Skechers distribution center on a vast  stretch of land in Riverside.

Two men stood in the middle of a shipping container filled with boxes of shoes, throwing the boxes onto a conveyor belt that stretched into the container.

These cobalt conveyors are the main event at this warehouse. There are more than 11 miles of them in total, snaking through stacks of boxes, layered on top of each other like a roller coaster for shoes.

Boxes first pass over a scale, beneath the belt, which weighs them, and then travel through camera scanners that record their dimensions.They then get scanned again so that a pop-up wheel can eventually shove each carton of, say, women’s size 9 black sneakers, into the same chute. A person then loads those boxes onto a pallet, which later is transferred to storage.

This entire process used to take 10 workers and several hours to complete. Now, it requires three people and takes less than an hour.

“You have to become more efficient. It’s the only way to upgrade. You can’t always be looking for cheap labor,” said David Weinberg, chief financial officer of Manhattan Beach-based Skechers.

“There is some manual labor [at the facility], but there are certainly more skilled jobs, managing power equipment, handling traffic and on computers,” he said.

Weinberg says Skechers has never been more productive. Far fewer employees handle twice as many pairs of shoes as they once did, and salaries have gone up on average — mainly because there are fewer people earning the minimum wage, Weinberg says.

Lourdes Gonzalez is a good example of how work, and compensation, have changed for the remaining warehouse employees.

Gonzalez, 46, started in 1992 as a packer in an old Skechers facility in Compton, where she earned minimum wage and walked through 50-plus aisles of shoes to fill orders written on pieces of paper.

“Now, everything we do is through the system,” Gonzalez says, seated in front of several monitors packed into a small room above the floor of the warehouse.

She spends her entire day overseeing the flow of orders through the building. One minute she is staring at a live map showing traffic flow and any jams on the conveyor belts, and the next she is studying a spreadsheet that shows how far along workers are in processing orders on deck.

Gonzalez earns more than $20 an hour for this work, and covers her three children on her company-provided health insurance.

“I love my job,” Gonzalez said, sounding like she means it. “It’s fascinating.”

Of course, there are still hordes of Californians who spend days on the housewares floor, putting in sweaty hours moving boxes around, unpacking them, and putting the stuff that was in them into new boxes.

Warehouse workers in California earn about $42,100 on average – about $20,000 less than the average pay in the state overall, according to the Bureau of Labor Statistics data. That includes pay for higher-level managers.

Many of them get their paycheck from Amazon, a company that still depends on masses of manual laborers even though it owns the most advanced robots in the industry.

In 2012, the company bought Kiva Systems, the maker of a 320-pound robot that automatically transports shelving units to workers when they need to retrieve items for an order. The robot scans a grid on the floor that contains hundreds of bar codes, which tell it where it is in relation to other bots, and where the product it needs to pick up is located.

Amazon has also put hulking robot arms in its facilities, which lift up 3,000-pound pallets, loaded with goods, 24 feet onto a robotic driving unit, which eventually brings the product to associates to either store or send out.

The influx of bots has started to affect hiring. Amazon has begun making room for more highly trained and well-paid technicians to ensure that the machines are charged up and connected to the network that controls them, and to fix any mechanical bugs.

“We are able to create more technician-type roles in the [robotic] fulfillment centers that pay differently than an hourly associate,” says Ashley Robinson, a spokeswoman for Amazon. “There is a level of technology and algorithms that people in those facilities would be working with.”

Somewhat paradoxically, though, Amazon’s obsession with speedier delivery maintains its appetite for people who can do rote work.

So, for now, Amazon is still hugely reliant on people such as Carlos Madrid, whose hand-eye coordination is indispensable. In a San Bernardino fulfillment center on Cyber Monday, Madrid, 27, furiously stuffed a Tommy Hilfiger watch, then breast pump accessories, then cleaning supplies into boxes, sealing them with baby blue tape and sending them to their new owners.

“It’s absolutely insane; it’s like Santa’s workshop,” said the Fontana resident, looking on as hundreds of co-workers swarmed the place. They picked ordered goods off shelves that were stacked like a haphazard library, hauling yellow bins from an inventory area to a conveyor belt, and tossing old boxes onto another conveyor belt that carries away trash.

Watch how conveyor belts and machines process shoes at Sketchers

Madrid, who never finished college, said he had a daily goal of how many boxes to process during his 10-hour shift. He gets help from a computer and a set of scanners that tell him how big of a box to use, a small machine that produces exactly as much tape as he needs, and equipment that automatically shoots the shipping label onto each box.

For the moment, that is about the extent of machine involvement at this facility, which employs 2,500 people and was Amazon’s first California warehouse when it opened in 2012.

Even the newer facilities that use more robots vary in terms of how many people they employ. One that opened in San Bernardino this year has about 1,000 workers; a fulfillment center in Tracy has 3,500.

That may change, experts say, as robots get smarter and infiltrate new corners of storage and shipping.

“There are a lot of people doing traditional warehouse work, but that will change,” says John Husing, chief economist for the Inland Empire Economic Partnership. “Everything is being automated.”